Don’t Tell Anyone Where You Are Going 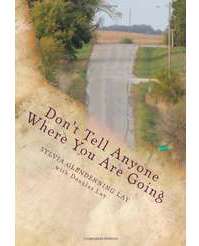 This is a story about an explorer… Not Columbus, who sailed over 4,000 miles to reach the new world, nor Magellan who covered over 42,000 miles to circumnavigate the globe, nor Neil Armstrong, who in Apollo 11, traveled nearly a million statue miles to reach the moon and back. No, this is a story about a four-foot eleven-inch woman who traveled, over a 40-year period, within a 9-mile radius within one county in southern Iowa during the first third of the 20th century.

This is her story, written in her own handwriting nearly fifty years ago, of her adventures beginning at the end of the 19th century in southern Iowa. Her story, hidden in a box in the basement of her youngest son, Paul, was discovered by her grandson, Douglas, only days after Paul’s death in 2011. Douglas has spent the past five years editing, researching, and preparing Sylvia’s amazing story for publication.